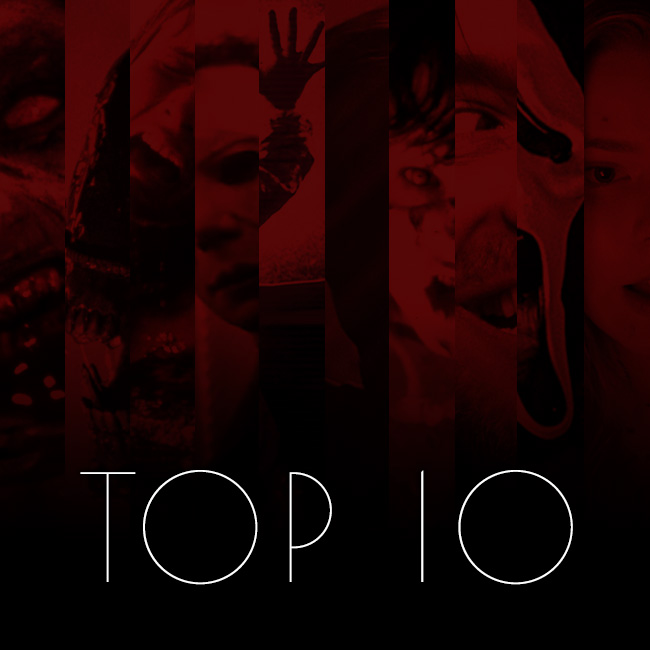 With spooky season upon us, our crack team of Movie Lovers put their heads together to rank our favourite horror films of all time. In compiling this list, we considered overall movie quality, impact on the horror genre and sheer scare factor to assemble a list of movies that will make you want to sleep with the lights on. Of course, scary movies are better together, so remember to check your local theatre showtimes, and you just may be able to see some of these frightful flicks playing at your favourite Landmark Cinema.

The Evil Dead was an instant classic, spawning a huge cult following, two sequels and a Broadway play. Sam Raimi, of Spider-Man fame, wrote and directed this movie right out of film school. It’s an incredible mix of gore, suspense, thrills, camp and dark humour. Raimi’s use of camera angles plus the mind-blowing camerawork of the ‘darkness’ stalking its victims through the woods delivers an intense sense of dread which contrasts the visceral gore of the prosthetics, makeup and practical effects throughout.

Wes Craven’s revolutionary film Scream re-invented slasher movies and re-booted the horror genre in the ’90s, spawning plenty of imitations such as I Know What You Did Last Summer, Urban Legend and Valentine. The film’s concept both honours and deconstructs the slasher genre, acknowledging its predecessors with affection while also conceding to their flaws. Scream had no rules, no topics that were off-limits and no specific approach to the idea of horror. It’s this originality which sets Scream apart from its peers.

The slasher that started it all. Halloween was the first of its kind and has since been turned into a giant franchise consisting of 11 films. We can thank it for the creation of other cult classics such as Friday the 13th and A Nightmare on Elm Street. Unlike many of the films that followed, Halloween doesn’t rely on gore, but rather plays off jump scares and stingers to create fear and terror. Writer/director John Carpenter builds relentless tension with his driving musical score and visual framing of The Shape throughout the film, all while eliciting great performances from Donald Pleasence and a newly-introduced Jamie Lee Curtis.

“They’re heeeeeere…” 1982’s Poltergeist—as much producer Steven Spielberg’s film as director Toby Hooper’s—is a baroque ghost story that takes the haunted house genre and gives it an ’80s suburban twist. We meet the Freeling family (Craig T. Nelson, JoBeth Williams and kids) whom, at first, are dealing with a seemingly benign supernatural phenomenon which quickly devolves into a menacing and terrifying ordeal. Television static and toy clowns became the stuff of nightmares for a generation of children. Poltergeist features many iconic scenes, but will sadly be remembered for the tragic off-screen events that befell some members of the cast in real life.

In 1975, Jaws gave rise to the first ever summer blockbuster and kept scores of people out of the water. A young Steven Spielberg—faced with the prospect a malfunctioning shark—used classic filming techniques to showcase the shark’s perspective and suggest its presence, letting the audience’s imagination fill in the gaps. John William's beautiful score and two-note musical theme—now, a pop culture legacy—only enhanced the experience, so by the time the shark made its appearance, viewers were already terrified. Bolstered by stand-out performances from Roy Scheider, Richard Dreyfuss and Robert Shaw, Jaws helped define the thriller/horror genre.

In space no one can hear you scream, but in 1979, the same could not be said for packed movie theatres. Ridley Scott’s classic defined a genre and engendered a slew of derivative films, none better than the original. Based on a screenplay by Dan O’Bannon and Ron Shussett, Alien was originally a B-movie script with only moderate Studio interest. What it had though was one GREAT scene! (yes, the chestburster!) When director Scott (a relative unknown at the time) came onboard, O’Bannon introduced him to the works of Swiss artist H.R. Giger – and the rest is movie history. A gothic horror movie set in space, Alien is a masterwork in claustrophobia, tension and pacing. Like Spielberg’s Jaws, Scott teases the monstrous Xenomorph, leaving audiences to squirm uncomfortably as one of cinema’s most iconic monsters gets closer and closer. Alien also helped usher in the female action hero with Sigourney Weaver’s breakout and iconic role of Ripley.

Alfred Hitchcock’s iconic classic Psycho was the original slasher movie that helped create the genre, despite never seeing the knife stab the victim. The demise of Marion Crane (Janet Leigh) shocked audiences in 1960, not just because of the implied violence but (spoiler alert) because such a big star was killed off so early in the film. Hitchcock’s mastery of tension and artistic camera work replaces the need for gore, making the shower scene one of the most recognizable clips in movie history. Supported by Bernard Hermann’s brilliant and recognizable score, Psycho holds up today as a Hitchcock masterpiece.

Both thought-provoking and unsettling, The Witch transcends the traditional horror flick. Avoiding classic clichés, The Witch relies on tone, atmosphere and scenography to create a feeling of dread and horror; feelings you don’t recognize until the credits roll. Director Robert Eggers cultivates conflict throughout the film, pitting religious beliefs against family unity, asking the question of what is more important to you when the time comes to choose. The Witch will linger with you for hours—if not days—and that’s why this film crack our top 10. Plus, what is up with that goat??

Based on William Peter Blatty’s novel of the same name, The Exorcist follows the growing possession of a screen star’s (Ellen Burstyn) young child and a priest (Jason Miller) who struggles with his own faith. As the girl’s possession grows more evident, the priest seeks out Father Merrin (Max Von Sydow) who has previously performed an exorcism. The film received ten Academy Award nominations, including Best Picture, making it the first (and one of few) horror films to be nominated in this category. The intense acting and chilling special effects created such a compelling film that the production itself was rumoured to be cursed. It has been almost 50 years since The Exorcist scared audiences and despite countless imitators and special-effects advancements, it remains one of the most terrifying and disturbing cinematic experiences to date.

Like many venerated films, Stanley Kubrick’s 1980 adaptation of Stephen King’s haunted hotel story was not immediately heralded as an all-time classic. In fact, many fans and critics didn’t know what to make of it, with some leaving the theatre disappointed. But like a fine wine, The Shining has aged incredibly well. So well in fact, that many consider it not only the best horror movie of all-time, but one of the best movies, period. Starring Jack Nicholson and Shelley Duvall, The Shining tells the story of the Torrance family, hired to look after the Overlook Hotel during its winter closure. Isolation quickly takes root, and Nicholson’s Jack Torrance begins a slow descent into madness. Kubrick imbues minute details into every frame and The Overlook becomes as much of a character in the film as the Torrances themselves. A masterwork of tension, atmosphere and an impending sense of dread, The Shining doesn’t rely on jump scares to startle viewers, but instead paints an unsettling picture of an everyday family who spiral into terror and darkness.