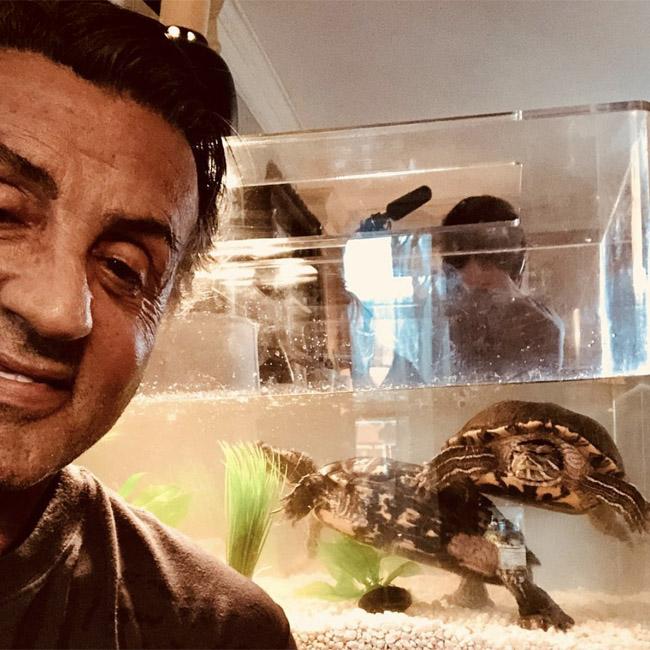 Sylvester Stallone kept the turtles from the first 'Rocky' movie.

The 72-year-old Hollywood legend took to Instagram to share a picture with Cuff and Link, who appeared alongside his boxer alter-ego Rocky Balboa in the 1976 movie, and revealed the shelled reptiles, who returned for 2018's 'Creed II' - the eighth instalment in the blockbuster franchise - are around 44 years old.

Alongside the snap of him posing in front of their tank, Stallone revealed: "CREED 2 with my original buddies from the first Rocky ... CUFF and LINK , now about 44 years old! (sic)"

In 'Rocky', Cuff and Link appear in a scene with the boxer's love interest Adrian Pennino (Talia Shire).

He tells her, "the exotic animals I was telling you about. These are my friends, Cuff and Link."

The duo are not the only pets of Stallone to feature in the movies.

Butkus, the bull mastiff, also appeared in 'Rocky' and the 1979 sequel 'Rocky II'.

The 'Demolition Man' star - who is now estimated to be worth a whopping $400 million - unfortunately had to sell his canine friend because he couldn't afford him at the time, but the owner sold him back to him for the eye-watering sum of $15,000, but he admitted it was "worth every penny".

Speaking in 2017, he said: "Then like a modern day miracle, the screenplay for 'Rocky' sold, and I could buy him back, but the new owner knew I was desperate and charged me $15,000.He was worth every penny!"

Alongside an old picture with Butkus when he was in his 20s posted on Instagram, Stallone wrote: "I absolutely love pictures like this. When I was 26, totally broke, going nowhere VERY fast, owned two pair of pants that barely fit, shoes that had holes in them and dreams of being successful were as far away as the sun... But I had my dog, BUTKUS, my best friend, my confidant, Who always laughed at my jokes, and put up with my moods, and was the one living thing that loved me for who I was! #man's best friend#BullMastiff #Loyalty #NewYorkCity#AmericanDreams (sic)"