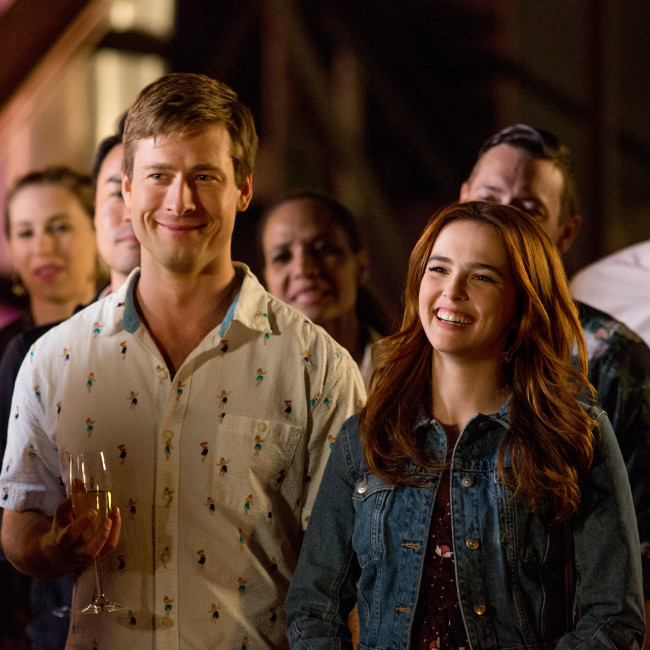 Zoey Deutch is working on a new rom-com with her 'Set It Up' co-star Glen Powell.

Although the 26-year-old actress has confirmed there will be no direct sequel to the 2018 Netflix rom-com, which follows overworked and underpaid assistants Harper Moore (Zoey) and Charlie Young (Glen), as they come up with a plan to get their bosses off their backs by setting them up with each other, it's not the last time the pair will be on screen together.

Appearing on SiriusXM's 'The Jess Cagle Show', Zoey said when asked if a second movie is possible: "There currently is not a 'Set It Up 2'."

However, she added: "There is another film with the writer of 'Set It Up', Katie Silberman, and myself and Glen Powell.

"We're all doing another movie together with Netflix. So, there is another rom-com coming from us."

And when pressed on when fans can expect to flick to arrive on their TV screens, she promised: "Soon, I know it's been a while. We just wanted to perfect it. We didn't want to like, you know, it's about quality over quantity."

Meanwhile, it was previously suggested Zoey could star in her own 'Zombieland' spin-off movie.

The movie star played Madison in 2019's 'Zombieland: Double Tap', and director Ruben Fleischer revealed he would love to develop a spin-off film that focuses on Zoey's character.

He explained: "I would love to do a Madison standalone movie.

"So, I think that story remains to be written. That would be a fun thing to go find out. That actually would've been a good post-credit scene where those two [Madison and Berkeley] are in Babylon just being pretty dumb together."

The original 'Zombieland' movie was released in 2009, and Ruben admitted there were various reasons as to why it took so long for the sequel to come to fruition.

He said: "It was a combination of us wanting to pursue different worlds after the first one. I know I was curious to not just do the same movie again. I was excited to try my hand at other stuff.

"After I did that, I realised just how special the first one was and how lucky I was to have that be my first movie.

"So, after about five years, I talked to the studio about trying to get the sequel going, but Rhett [Reese] and Paul [Wernick] were very busy with 'Deadpool'. So, they worked as executive producers, and helped us crack the story.

"Then, we worked with a few different writers to get the script to a place, and every draft got better and better."