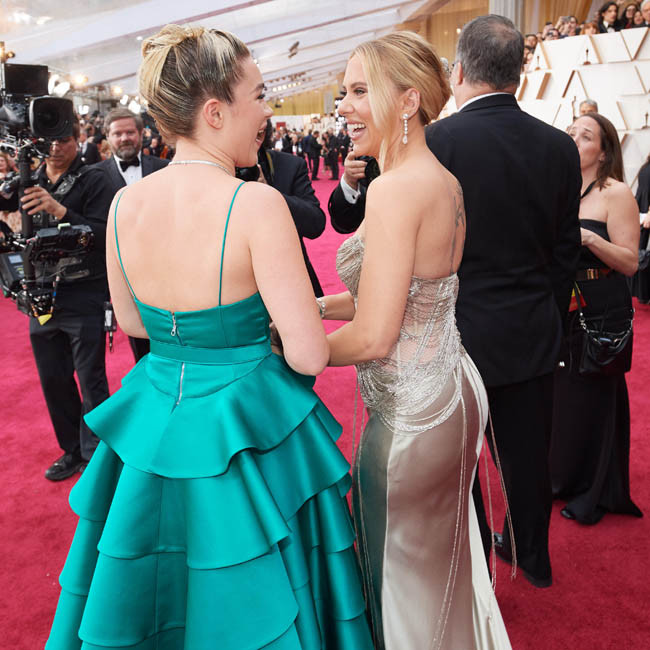 Scarlett Johansson advised her 'Black Widow' co-star Florence Pugh to pace herself when it came to the "gruelling" stunts.

The two actresses appear as Natasha Romanoff and Velena Belova, respectively, in the highly-anticipated Marvel Cinematic Universe blockbuster, and the 36-year-old star revealed the one thing she wished she'd have known when she started out in the action-packed movies that she has passed on to newcomers.

She said: "The physical work is so grueling, and you can really burn out on that stuff.

“I did say to Florence in the beginning that this is a long job. And selling things — the emotional grit behind it — is a much more valuable way to spend your time than actually trying to be a professional athlete. The whole stunt department are incredible athletes, and you’re never going to reach their 16 years of professionalism, or whatever, in four weeks. So that’s the one piece of advice that I wish I had gotten, which, eventually, Sam Jackson gave me and now I pass through myself to Florence. ‘Don’t kill yourself, kid!’ Sam Jackson said to me; it was something like that. So I took his advice.”

The 'Little Women' star insisted she wasn't as "intimidated" by the stunts department as she had gotten the swing of things when she played Saraya 'Paige' Knight in the 2019 wrestling biopic, 'Fighting With My Family', which is based on the early career of WWE superstar Paige.

Florence told The Hollywood Reporter: "Oh my goodness. I’m so grateful for all of the work that we did on 'Fighting with My Family'. I felt like I wasn’t so intimidated by the stunts department simply because of that. Whenever you have to be physical in any way, it is intimating. You essentially want to look like a cool person, but most of the time, you don’t. So you have to learn how to look good while moving, and with 'Fighting with My Family', that was such a silly, fun and wonderful gig that it really took off any fear of movement and action in the future. So it just made me really excited because I do really enjoy action."

The 25-year-old star also shared a funny anecdote from the set, when the pair were filming a physical scene and Scarlett ended up poking her sweaty pits.

She shared: "The moment where I totally died was when we were doing a scene and Scarlett put her hand in my armpit. (Laughs.) And I just died because I knew how sweaty it was. So Scarlett looked at me and went, 'That’s a sweaty pit.' I was like, 'Oh, no! That’s it. It’s over. R.I.P. Scarlett Johansson tested my sweat.'"

Her co-star quipped: "It’s a tough job, but somebody’s gotta do it."