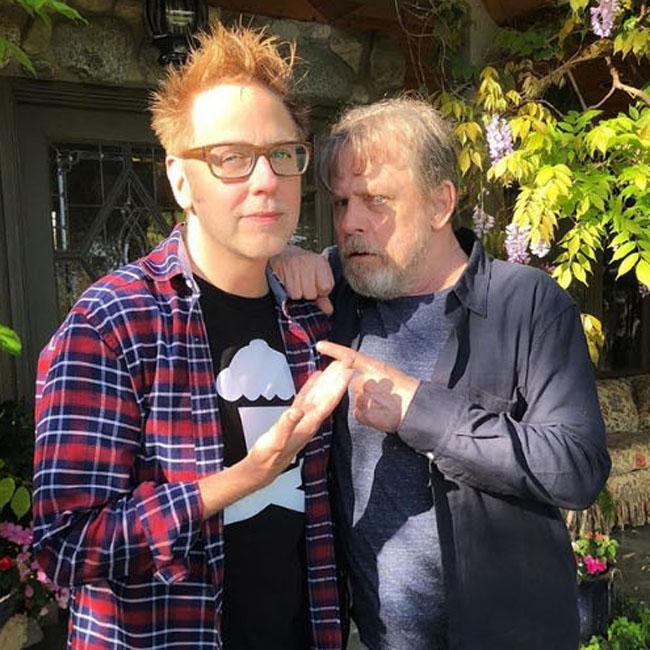 James Gunn: Mark Hamill has never been in talks for Guardians of the Galaxy 3

James Gunn has poured cold water on speculation Mark Hamill is set to appear in 'Guardians of the Galaxy Vol.3'.

The 'Star Wars' legend and the filmmaker behind the superhero blockbuster hinted in the past that the actor could join the Marvel Cinematic Universe, and they added to the rumours by posting a snap together on social media last May.

Sharing the snap, Gunn wrote on Instagram: "Finally stopped by my neighbor @hamillhimself's for that cup of coffee we talked about on twitter months ago. And some bbq. And cornbread. And cobbler.

"And OKAY IT'S TRUE I ATE THE HAMILL'S OUT OF HOUSE AND HOME BACK OFF. Honestly, though he's an amazing guy and I am really grateful to him and the whole Hamill clan for a great Sunday. (sic)"

Hamill posted the picture himself and suggested that the topic of the MCU may have come up in conversation, as he revealed they spoke about "EVERYTHING".

In his coy caption, he wrote "Such a great day meeting my neighbor @JamesGunn! We have so much in common & talked about EVERYTHING: the weather, gardening tips, favorite recipes, growing up Catholic, our mutual love of dogs, bleu cheese, risqué limericks & the weather again. #FunWithGunn."

However, Gunn held an Instagram Stories Q&A with fans on Sunday (17.11.19), and admitted he and Hamill never discussed him joining the blockbuster comic book franchise.

He said: "Mark is my friend. We never had these talks you speak of."

Hamill is best known for starring as Jedi Master Luke Skywalker in the hit sci-fi franchise 'Star Wars', but in a Twitter conversation with Gunn in February 2018, he appeared to get the ball rolling.

A Twitter user wrote: "@JamesGunn, could you do me a huge favour and find a role for @HamillHimself in Guardians 3? The awesomeness of it might end me, but I'm willing to risk it. Thanks (sic)"

Gunn replied saying the star can "come over" to his house in Malibu to talk about a role.

He replied: "I think @HamillHimself lives around the corner from me in Malibu so he can just come over and we can talk about it over a cup of coffee. (sic)."

And Hamill - whose character died in the eighth instalment of the franchise - joked he was happy to meet with the filmmaker as he is now an "unemployed actor".

Meanwhile, the filmmaker also claimed that the MCU character Adam Warlock is unlikely to feature in the movie, despite Ayesha (Elizabeth Debicki) name-dropping him in the post-credits of 2017's 'Guardians of the Galaxy Vol.2'.

He said: "I never said Adam Warlock was in the movie."