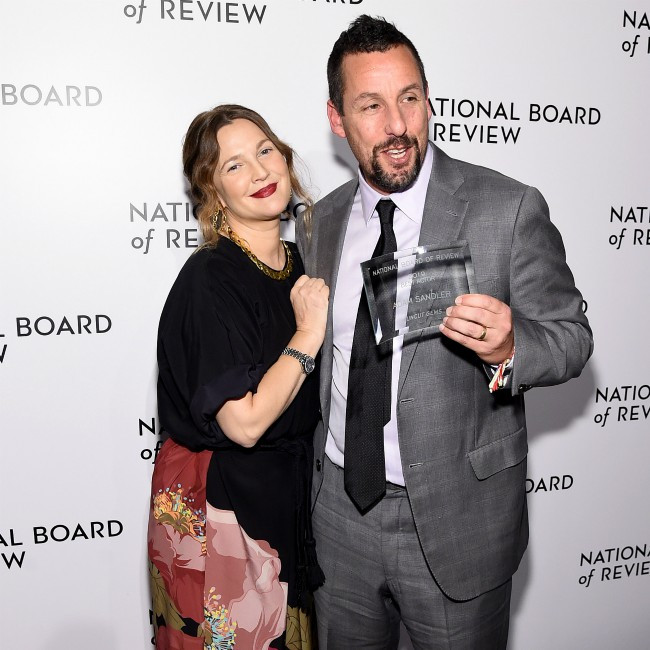 Drew Barrymore and Adam Sandler hint at fourth movie together

Drew Barrymore and Adam Sandler teased their plans to reunite for a fourth movie together at the 2020 MTV Movie & TV Awards: Greatest Of All Time.

The Hollywood pair won the golden GOAT for Dynamic Duo for their movies '50 First Dates', 'The Wedding Singer' and 'Blended' at Sunday night's (12.06.20) ceremony.

And 'Uncut Gems' star Adam hinted that another flick from them is on the cards in the future.

In their acceptance speech, Drew said to Adam as they appeared virtually: “It was so much fun to make a movie with you in every of the last three decades."

Adam continued: “Yeah, that’s true — but also, it’s a new decade so we get to make another movie together."

The 45-year-old actress then suggested that they should wait until they find a really "special" story to tell.

She said: “Right, well let’s wait until we find something amazing, we do have 10 years.”

Drew concluded: “You’re right. Well, that’s not enough time. I don’t know, it doesn’t matter — it has to be special.”

Meanwhile, the ceremony - which was hosted by Vanessa Hudgens - saw 'Footloose' star Kevin Bacon appear in a box with real-life goats in a nod to being crowned the winner of the GOAT (Greatest Of All Time) Dance Your A** Off accolade for his "life-changing" role as Ern McCormack in the 1984 dance movie classic.

In his speech, Kevin said: "Oh wow. I can't believe it. I'm so excited to be winning this golden GOAT award for dancing my a** off all those years ago.

"I am truly honored.

"I just want to say thank you to Herb Ross (director), Craig Zadan (producer) and Dean Pitchford (screenplay) for giving me the opportunity to be in that life-changing movie.

"And also I want to thank Lynne Taylor-Corbett, who taught me all those GOAT-worthy moves all those years ago."

Turning to the goats, Kevin said: "Guys, we've got a golden GOAT, can you believe it?"

Gal was named the first-ever recipient of the GOAT She-Ro prize for her star turn as Wonder Woman in Patty Jenkins' 2017 movie of the same name, which has a sequel, ‘Wonder Woman 1984', on the way.

She said: "Thank you so much MTV for honoring me with the first-ever golden GOAT She-Ro award. It has been one of the greatest joys in my life to play this character.

"She means so much to me and I know how much she is loved by all of her fans, so to be part of her legacy is truly, truly, truly special.

"I am so excited for Wonder Woman fans around the world to take this next journey with me in 'Wonder Woman 1984'.

"I can hardly believe we can finally get to experience it, but I think you will feel it has been worth the wait."

Chadwick Boseman - who passed away this year following a secret battle with cancer - was posthumously honored with the GOAT Hero For The Ages prize for his iconic titular role in 'Black Panther', with fellow Marvel stars Don Cheadle and Robert Downey Jr. presenting the accolade.

Sarah Michelle Gellar and Selma Blair attempted to re-create their iconic kiss in 'Cruel Intentions', as they picked up the GOAT Legendary Lip Lock award.

The 2020 MTV Movie & TV Awards: Greatest of All Time winners list is:

GOAT: Hero for the Ages: