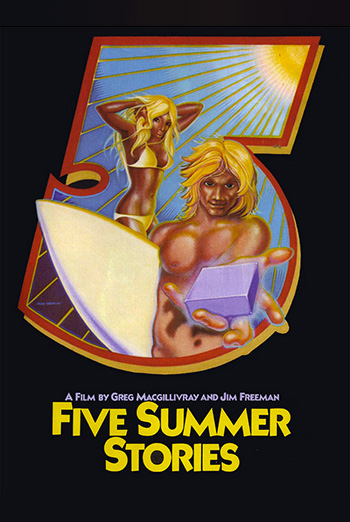 It’s been called the finest surf film ever made.  When Greg MacGillivray and Jim Freeman’s iconic surf film Five Summer Stories premiered in 1972, it took the surfing world by storm.  The film’s unusual format – a montage of five-plus exciting, controversial and beautiful vignettes or stories – perfectly captured a fractured era in which an explosion of creativity and revolutionary change was shaking down the old order, taking the sport of surfing into new and unknown territory. With its groundbreaking use of super slow-motion surf cinematography, Five Summer Stories took the surf film genre to a new artistic level, inspiring a generation as it depicted the pure, innocent joy of surfing as symbolic of humankind’s best possibilities.

Now, in celebration of the film’s 50th anniversary, Greg has edited a new version with ten stories instead of the original five.  Digitally remastered and with a new digital soundtrack featuring the music of Honk and the Beach Boys, this truly is the best version of this classic film.

Five Summer Stories is directed and produced by Greg MacGillivray and Jim Freeman, and photographed by MacGillivray, Freeman, Bud Browne (“Going Surfin’”) and George Greenough, with narration written by Drew Kampion. Music is composed by the 1970s rock/surf band Honk and features songs by the Beach Boys.